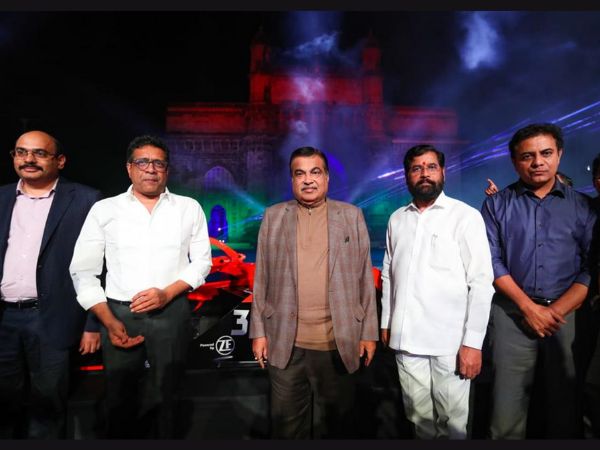 The race will be held on 11th February 2023 in Hyderabad alongside the picturesque Hussain Sagar Lake.

Mumbai (Maharashtra) [India], January 17: With 30 days to go for the ABB FIA Formula E World Championship “2023 Hyderabad E-Prix”, Mumbai hosted a “30 days to go countdown” event on 12th January evening. This historic racing event, taking place in India for the first time, will be held near the picturesque Hussain Sagar Lake in Hyderabad on February 11, 2023. It is part of a four-year agreement that will see the event held in India through 2026.

The spectacular “30 Days To Go Countdown” which began with a Ganesh Vandana by the Colors of India was graced by Sri. Eknath Sambhaji Shinde, the Chief Minister of Maharashtra, Sri. Nitin Gadkari, Union Minister of Road Transport and Highways of India, Sri. K.T. Rama Rao, Minister of Municipal Administration and Urban Development of Telangana, and Sri. Anil Kumar Chalamalasetty, Founder, Greenko and Ace Group. The event finale had a special performance by Dharavi Rocks, highlighting sustainability

Sri Eknath Shinde, Chief Minister of Maharashtra said, “We are very glad to welcome the Formula E team to Mumbai and happy that they chose to celebrate this important milestone here at the Gateway of India. The Formula E World Championship coming to India has made us all proud. In keeping with the true spirit of progress, this championship will power us through to a sustainable future.”

Sri K.T. Rama Rao, Hon’ble Minister of IT, Industries and Municipal Administration & Urban Development, Government of Telangana spoke at the event and noted, “The Formula E World Championship coming to Hyderabad and India for the first time ever is a testament to the direction of progress India has taken. Sustainable mobility is the way to go for a cleaner, greener future. We are proud to be hosting this international event in Hyderabad and welcome all of India to come witness this race.“

Anil Kumar Chalamalasetty, Founder of Greenko Group and Ace Group said, “Today’s Mumbai countdown marks a step towards a momentous event in acknowledgement of an urgent need to decarbonise the economy including the transport & mobility sector. 30 Days from now, India will be at the forefront of Electric Vehicle racing, hosting its first ever Formula E race in partnership with the Govt. of Telangana and support from the Govt. of India. We will accelerate our race to ensure that India Drives the future of sustainability and decarbonisation. I welcome you all to witness history in making with the first of its kind race on 11th February 2023 on the streets of Hyderabad.”

2023 Hyderabad E-Prix, accelerated by Greenko, is being hosted by Ace Nxt gen in association with The Government of Telangana and Formula E. Hyderabad will host Round 4 of the 16 races for the 9th season of the championship which will be organized between January and July 2023. The ticket sales which went live on January 4 has received an overwhelming response from fans around the world. Organisers have categorised the tickets into four categories based on the vantage points on the track: Ace Grandstands, Premium Grandstands, Charged Grandstands, Grandstands.

A total of 11 teams with 22 cars will participate, including notable names like McLaren, Maserati, Porsche, Jaguar, Nissan, and Mahindra Racing. The highlight of the event will be the introduction of the Gen3 Era Formula E car, which is known for its top speed of 322kmph and its status as the world’s fastest, lightest, most powerful, and most efficient electric race car.

As the world’s first all-electric FIA World Championship and the only sport certified net zero carbon since inception, the ABB FIA Formula E World Championship brings dramatic racing to the heart of some of the world’s most iconic cities providing an elite motorsport platform for the world’s leading automotive manufacturers to accelerate electric vehicle innovation.

The Formula E network of teams, manufacturers, partners, broadcasters, and host cities are united by a passion for the sport and a belief in its potential to accelerate sustainable human progress and create a better future for people and the planet.

Ace Nxt Gen is the official promoter of the Formula E Race in India in partnership with Formula E and the Government of Telangana. Ace Nxt Gen is founded by Mr. Anil Kumar Chalamalasetty and Mr. Mahesh Kolli, who are also the founders of one of the world’s leading Energy Transition and Decarbonization Solutions Company – Greenko, India.

Ace Nxt Gen is driven by a commitment to decarbonisation for a cleaner and sustainable future. Starting with the mobility sector, Ace Nxt Gen will weave innovation and technology to make an impact in transitioning energy across the globe.

To know more and to book tickets, please visit – www.acenxtgen.com  or in.bookmyshow.com