Mrityunjay Shahi, the founder of Salary Dost, has received the Most Prominent CEO of the Year – 2022, Fintech Category 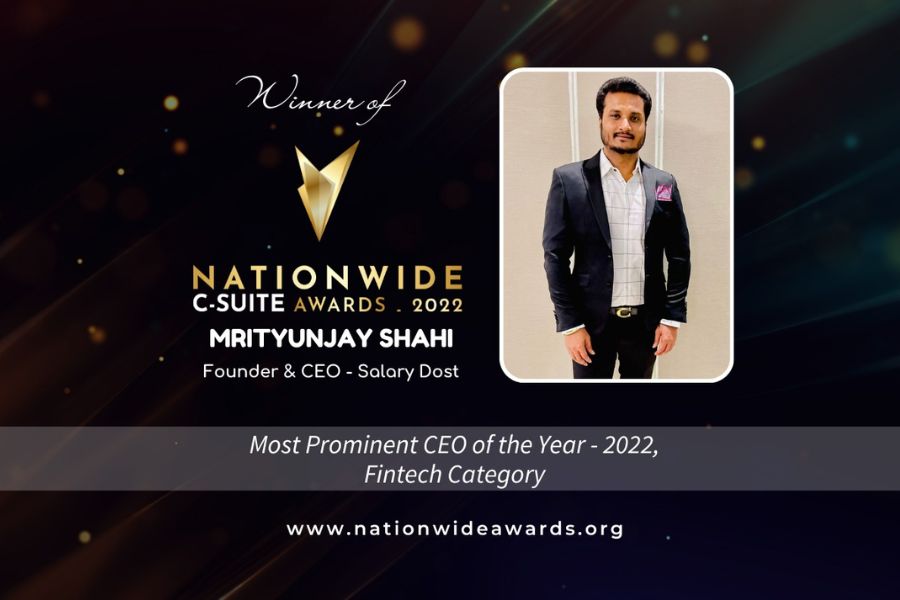 September 13: Mrityunjay Shahi is a young entrepreneur, as he is known. One of the brightest young minds our country could have, a mind sharp enough to figure out things that even people so mature could not. Mrityunjay Shahi, an ace in the field of banking and finance as well as the digital sector, has excelled in his field and now is running a successful start-up very popularly known as “Salary Dost”.

A young but experienced gentleman who is so keen on the work he does. A leader of such a start-up has a great idea linked to it. His company has a great objective of bringing a revolution to the small platforms of loans. His mission is as pretty. Clearly, he has mentioned ‘EXPAND YOUR SALARY’; whoever joins him will benefit from the company because of what he has clearly said.

Mrityunjay Shahi, popularly known as the leader or the CEO of the company SALARY DOST is one of the fastest and fast-expanding starts in recent times. It is an interactive as well as an inclusive start-up that provides the loan space very quickly and efficiently. Mrityunjay Shahi has given his start-up “SALARY DOST” life in the year 2018. He converged his knowledge of digital media and technology with the information and skill of finance which proved to be the perfect recipe for one of the most disruptive start-ups. He, unlike a normal person, knew that technology was not only limited to entertainment or games but can be converged with finance and digital platforms to share the ideas and thoughts that he had in his mind at that time. He focussed on giving help to small-scale Indian people or citizens with short-term loans. His start-up has been one of the game-changing starts, as, despite all the fluctuating economic situations and scenarios, his company kept excelling in the field they chose. His start-up has grown on such a huge scale with figures like 18 crores loan disbursal, which benefitted over 30,000 citizens, even the company’s growth rate has been up to 300% this year.

Despite ongoing changes to the regulatory landscape, the digital and fintech landscape, and the world’s economic conditions, Mrityunjay has guided Salary Dost to become a genuine GAME CHANGER in this fast-moving sector of digital lending. Thousands of individuals in India are receiving assistance from Mrityunjay and his business Salary Dost, many of whom are in urgent need of payday loans.

In the end, we learn how to believe that we can pull off our idea with the right amount of ingredients, such as confidence, knowledge, passion, and effort. Just like Mrityunjay Shahi, we need to focus, and then with hard work, we can achieve what we want. We need to remember that every journey has a beginning; you need to start walking on the right path towards the right goal, and success will be assured.